Literally. We may have found evidence of crushed human bone being mixed into the clay used to make Early Bronze Age pottery. While I was looking at the Moseley Height Bronze Age pottery last week in Towneley Hall Museum I saw something that I thought was very exciting. Large white specks in the body of the pot had a very bone-like appearance. I kept quiet about this in last week’s post because I hadn’t had chance to check it out properly, however…

This is the surviving portion of Urn C. It is the bit around the rim and, as you can see, it has been fairly intensively restored since it was excavated in 1950. There are big sections where the shape has been reconstructed (or made up) using plaster of paris and brown paint. The rest of it is original Bronze Age ceramic but, to keep it from crumbling, it has been impregnated with something like PVA resin. Oddly, this means that the whole thing now feels as if it is made of plastic, which I suppose in one sense it is.

What this image also shows are the white specks of whatever it was that had been used to temper the clay. I’ve posted before about the processes of pottery manufacture and the need to add temper to clay. There are various practical reasons why you do this; it lets the steam out during firing and can improve the heat resistance of the finished pot. However, studies of modern potters in traditional societies around the world also show that it is often added for all kinds of other strange reasons. This is not to say that the temper wasn’t regarded as extremely practical by the people who used it – you can see, for example, how putting something into the mix of a burial urn that stopped the spirits of the dead from coming to eat your soul might be a high priority. 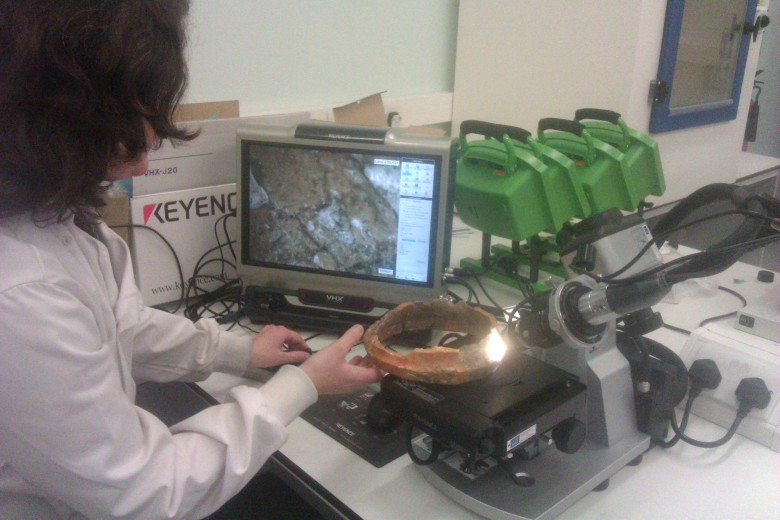 Last week, peering through the layers of resin wIth my little x20 magnification jeweller’s lens, I wasn’t quite sure what these white lumps were. Mike very generously agreed to loan us the pot so I could bring it back to Preston and put it under a microscope. On Wednesday morning Clare and I borrowed the fancy new digital microscope in the Forensic Science lab (usually used by our ballistics people to study gun cartridges) and set about trying to capture good images of the mystery tempering material. 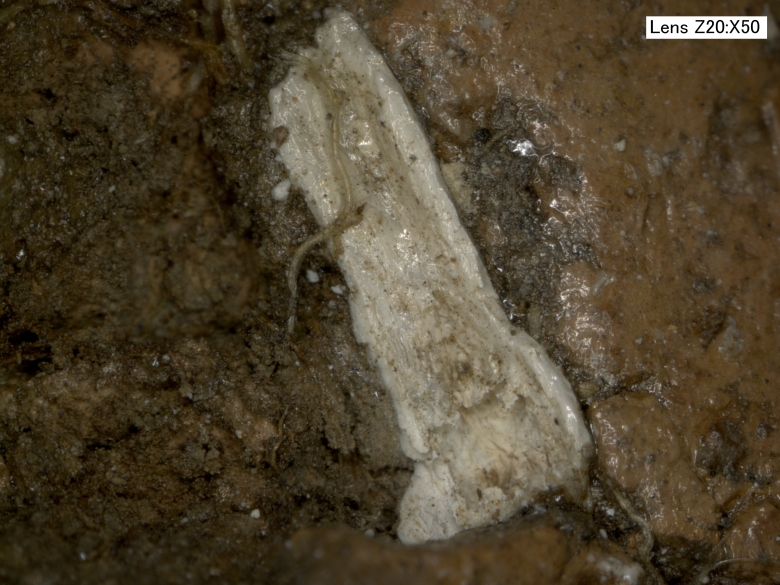 This is another fragment at slighter smaller magnification. Jim has had a look at these too and, like me, he is convinced that they are particles of burnt bone.

Burnt bone as temper in British prehistoric pottery is unusual, but not completely unknown. I know of Neolithic sherds from Hazleton North in Gloucestershire and Market Deeping in Lincolnshire, where bone was used in this way, and there are almost certainly others. We now have lots of questions about our bone tempering. Why did this pot need crushed bone in it when the other two urns from the site don’t have any? Is it cremated human bone or is it animal? (we are casting about for a non-destructive way to answer that one) and what is the relationship between the cremated bone buried in the pot and the bone temper fired into the body of the pot? We can begin to imagine all kinds of fascinating connections between the body of the pot, the body of the person buried in the pot, the food they ate and the other people buried in the ring cairn.