There is a fantastic picture on Heritage, Landscape, Creativity of Scottish timber circles burning. It’s suggested that one of the ways memory of these important sites was created was through dramatic destruction events. We don’t have any evidence at New Laund of the main circle posts burning (it is in Lancashire after all) but some quite dramatic demolition took place there nevertheless.

I have been working on the interim report this week. This means I have to compare what is written on the context sheets (stored in one lever arch file), what is drawn on the plans and sections (stored in an A3 portfolio) and the finds records (in an excel file on my computer). I have piled up books and boxes on my desk so that I can have all these things open and able to be read at once. It is like a very low-tech and muddy multi-media interface for archaeological data. The report itself is coming along. I finished the section dealing with trench H today, so there is a fighting chance that the whole thing will be completed, checked and ready to post by next Friday. One result of all this work has been a clear understanding of some of these destruction events. 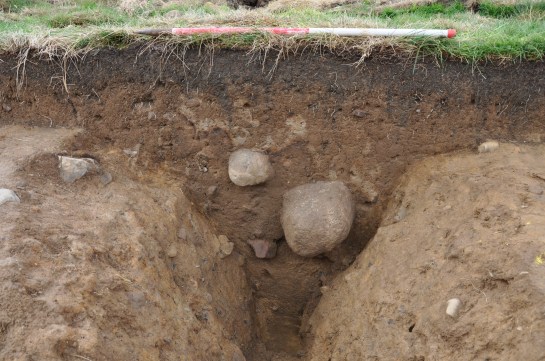 This is the ditch that held the main timber circle posts in cross-section so that you can see all of the phases of use. The lower, steep-sided, part of the ditch clearly shows where the main posts of the circle used to stand. It looks to me now as if we can see evidence of deliberate re-digging of this feature about half way down, just below the big stone, where it broadens out. I think that all the old fills of the ditch were dug out to this depth, probably in the Early Bronze Age, while the posts were being removed.

This photo shows the re-cut ditch as it probably looked once the two posts that used to be in this ditch segment had been pulled out. The disturbed packing stones that had been around their bases have slumped back into the hole. All these layers are full of tiny fragments of cremated bone too, so I think that at least one cremation burial was disturbed when the posts came out.

My speculative reconstruction of the sequence here is that the timber circle was built in the Late Neolithic and stood long enough for at least one cremation to be buried at the foot of one of the posts. The cremation is likely to have been in a skin bag as we have no surviving pottery from this trench. We found two chert scrapers in this ditch segment, and lots more in similar contexts last year. So it may be that as well as the burial some hide-working tools were placed in the grave.

At some point over the next two centuries or so (the posts didn’t decay in situ, so they can’t have stood there for a very long time, but oak posts this size would be quite resilient) the circle was either destroyed or remodelled. The re-digging looks quite destructive to us now, and it certainly made a mess of the earlier burials. One thing that might suggest that the site was being taken apart at this date is that nowhere we have excavated have we found any evidence that a timber circle post was allowed to stay in its posthole until it naturally decayed.

Even though New Laund wasn’t burnt down it is clear that when the circle went out of use something fairly dramatic took place. There is another post about the Northlight Heritage Burning the Circle event  on the Urban Prehistorian blog.